June 30, 2018 admin Comments Off on Cleaning Pools, Spas, and Ponds

Where to drain your swimming pool, spa, or pond for cleaning or repairs?  Not in the creek behind your house or into the street gutter, where it flows into the bay (both are illegal, harmful to the water supply, cause bank erosion). You can run it down the drain, to go through the sewage treatment process, but that wastes it.  OR, instead, let the chlorine evaporate, then use the water to deep soak your lawns and plants.

Fighting the Demon Affecting Our Elders

June 29, 2018 admin Comments Off on Fighting the Demon Affecting Our Elders

What is non-government-related that will potentially bankrupt the Social Security system?  What is being experienced by an estimated 60 million people?  What will 70% of people over age 85 suffer with?  What easy action can people in their 60s take to help prevent it?  This 6-minute Ted Talk by John Denoer, Disrupting Dementia, is an eye-opener to helping ourselves and our older loved ones.

The Perfect Diet, without a Doctor

June 28, 2018 admin Comments Off on The Perfect Diet, without a Doctor

Today’s  Thursday Thought quote offers a diet plan that’s  certain to  improve  our well being.  And you don’t  even need to consult a doctor first.

Giving a “Lyft” to Cancer Patients

June 27, 2018 admin Comments Off on Giving a “Lyft” to Cancer Patients

Lyft is now life-sharing in addition to ride-sharing. It is working with the American Cancer Society to give cancer patients rides to their medical appointments. This is a big deal because transportation to the all-important, frequent appointments is a major difficulty for many people.

So far, it has been a pilot program in Las Vegas and Miami, but it’s expanding. Contact the American Cancer Society and Lyft to encourage it in your area.

June 26, 2018 admin Comments Off on Elder Driving: Safety and Independence

Is there an older person in your life who should give up driving but hates to even think about it?  You can’t just sell their car or take away their keys, and blaming them for accidents or for driving too slowly only creates a rift between you.

AARP has a free online seminar that leads you through how to handle the situation.  It’s called We Need to Talk. Learn how to approach the subject in a natural, loving way, assess their driving skills, and discuss alternatives to driving themselves while maintaining their cherished independence.

This little course is a valuable tool. Take a look at it.

Doing the Time for the Crime

You did the crime, now do the time!  We’ve all heard this.  St. Paul probably heard it , too, ‘way back in Biblical days, when he was jailed for his faith, although most people today are “in” for unholy acts.  We call prisons “Correctional” and “Vocational” institutions.  We want people to learn their lesson, get out, and “sin no more.” Meanwhile, they’re hardened by a solitary, harsh life, made worse by friends and family who forget about them.

But basic humanity calls us to remember all members of our community, to support and embrace even people who have made terrible mistakes and have tried to turn their lives around.  You can help these people re-enter society as productive, law-abiding people simply by writing them, giving them a positive stake in the world they’ll be rejoining.  I can tell you where to find names.

A little afraid?  After research and years of writing prisoners, I’ve developed some simple guidelines to make writing a prisoner safe and comfortable for you.  Let me know and I’ll send you that information.

Use that Left-Over Coffee in Un-thought-of Ways

June 23, 2018 admin Comments Off on Use that Left-Over Coffee in Un-thought-of Ways

Most of us either toss out left-over coffee so we can wash the pot or refrigerate it and drink the questionable liquid the next day.  Thanks to AARP, I now know other ways to use it instead. I  think I’ll try these. Well, I’m not sold on the salad dressing yet……..

“Ice It: Coffee ice cubes are great in iced coffee; they don’t dilute the drink as the ice melts. Or add your preferred milk and flavorings to the coffee and pour into Popsicle-type molds for a frozen treat tomorrow.

Make Sauce: After pan-frying chicken or pork, deglaze the pan with coffee rather than wine, for a deeper, Southern-style gravy.

Prepare Jerky: Marinate beef slices in strong coffee and your favorite flavorings for up to eight hours, then dry the beef in the oven at 200ºF for about four hours.

Top Your Pancakes: Combine coffee with melted butter and pour.

Brine a Chicken: Coffee-based brines that include spices such as cloves, star anise, peppercorns and, of course, plenty of salt make for a delicious and moist roast chicken.

Dress a Salad: For a simple coffee vinaigrette, cook equal parts brewed coffee, balsamic vinegar and maple syrup on the stove at a low heat until the mixture is syrupy. Top it off with a little lemon juice.”

I may have to re-start paying cash for everything. I’d miss the cash-back percentage I get from my credit card company, but I may have no choice.

Go back a bit, when those card readers were installed for “our convenience.” Even at my doctors’ offices they’re up high on a counter. That’s great for people who aren’t in a wheelchair or scooter, like me, but too high for me to swipe. Then they added the chip, with a slot that was lower. But many of the card readers don’t angle down to a usable position for me–some don’t allow any real space between the reader and the counter top for a person to manipulate the card into the slot.  And as far as signing, forget it, because the screen is at the highest point on the reader. I’m lucky if I can scrawl an “X” or have the cashier do so, neither of which is exactly a secure signature.

Now they’re talking about using a fingerprint for ID.  Since I can’t lift my arms any further than straight out (on a good day), how will I be able to press my finger against their screen?  Also, I worry about my often-home-bound friends (especially in bad weather). They (sometimes me) depend on others to do their shopping, sending along their credit card.  We can’t send along our finger, so the card is useless.

Credit card companies should realize that people with disabilities spend as much (or more) money than everyone else, and that everyone else is, in fact, only currently non-disabled. If they want our money, they need to make it easier for us to spend it.

My favorite season arrived this morning, and with it my rejuvenation.  Today’s Thursday Thought quote explains why. 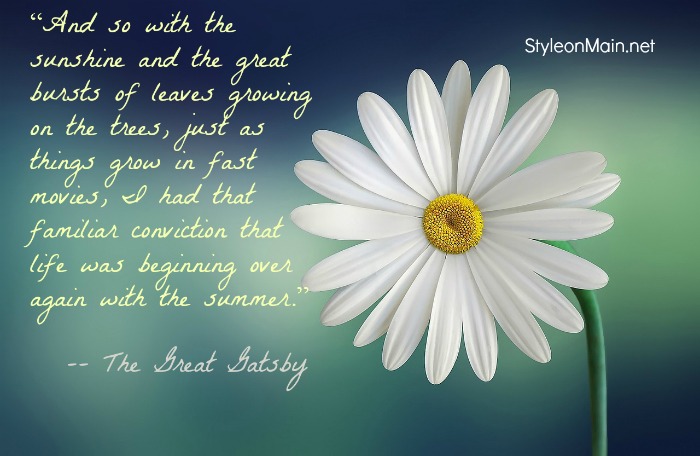 I Have to Vent

I’m sorry, but today I need to vent. I’m watching all those kids who are alone although warehoused with hundreds of other kids, scared, wanting their parents, not knowing what’s going on or what will happen to them five minutes from now, feeling that they must have done something really bad to be in the situation they’re in.

And what am I hearing from the adults who can do something about this? Depending on who’s speaking, it’s the fault of 1) the President, 2) Democrats, 3) Republicans, 4) government agencies, 5) the kids’ parents, 6) Obama, 7) Obama and Bush, 8) current law….

It really, REALLY bothers me that the only activity going on to alleviate these kids’ misery is a bunch of hot air–blame rather than action. Yet, if politicians set aside their political bias, narrow allegiance, and eye toward re-election, they CAN do something. The President can sign yet one more Executive Order in his long string of them. The Democrats and Republicans can stop bickering and pass legislation with enough of a majority to override a possible Presidential veto. Government agencies can do what they’ve done recently to create this  problem in the first place, namely reinterpret the pretty broad law. It’s too late for the parents to help their kids, because they’re already here. But where are all the other adults?

Call me a bleeding heart liberal, but even my conservative friends are crying along with those children.