When you want to create a confined space for your dog, delineate your property line, or beautify your yard, forgo the fencing.  Instead, use drought-resistant shrubs and hedges.  They add beauty, privacy, and a safe enclosure, plus absorption of CO2 and habitat for your critter-neighbors.

Nebraska lawmakers have banned the death penalty, even overriding their governor’s veto.  I congratulate them on realizing that the “eye for an eye” law was–listen up, Christians–the old law, replaced by a new Law of humanity and reason.  They came to understand that the death penalty, on the moral level, is unequally applied and too permanent in cases when guilt is later disproved; on the practical level, far too expensive; and, on the emotional level, seldom brings victims’ families the peace they long for.  Lawmakers saw that the practice was not justice but simple revenge.

Nebraska is state #19 (plus DC).  We’re well past 1/3 of our civilized nation’s ridding itself of the practice, as much of the rest of the major nations have done.  Yet we’re so far away from even 1/2.

I’m sad to say that my state, California, is on the wrong side of those percentages.  If you live on that side, urge your state’s lawmakers to do something about ending this national shame.

Our Forests and Ourselves

May 28, 2015 admin Comments Off on Our Forests and Ourselves

When I read yet another news story about a corporation making more profits for themselves by destroying forests, especially our life-sustaining rain forests, I’m painfully reminded of today’s Thursday Thought:

May 27, 2015 admin Comments Off on Malia Obama’s Hand in Marriage

How much would President Obama’s daughter Malia fetch in a marriage contract?  Hey, she’s 16, practically an old maid.

This isn’t a hasty decision on the part of Felix Kiprono, who has been interested in her since she was 10 years old, at which time he decided to be faithful to her and wait for her.  Consequently, he hasn’t dated in all that time.

It’s coming out now because Kiprono intends to put his proposal before President Obama when he visits Kenya this July.  He is writing a letter to ask that Malia come with the President on his Kenyan trip.

He wants to live the simple life with his bride, teaching her how to milk a cow and cook ugali (maize porridge) and other traditional Kenyan dishes.

Why do I pass on this story to you?  Because I thought I’d break up your week with a deeply romantic, heart-felt story.  That’s the kind of thing I do for my faithful readers.

Your Buns won’t Fit into this Satchel

May 26, 2015 admin Comments Off on Your Buns won’t Fit into this Satchel

Dig the gum and gunk off those old leather airline seats and put them to good use rather than tossing them into the landfill.  That’s what’s happening with that old Southwest Airline seat that you may have settled your buns into.

The 40+ acres of leather removed from 80,000 seats went to Looptworks, in Portland, OR, who hires adults with developmental disabilities to disassemble and clean the seats before the leather is made into satchels, totes, backpacks, handbags, and toiletry cases.

The jobs being created are useful, and the people are learning job skills.  In addition, by using recycled rather than new leather on the bags, the earth wins: the manufacturing of each of these bags saves 72% in carbon emissions and 3,000-4,000 gallons of water.

May 25, 2015 admin Comments Off on Memorial Day Tribute

Today, pause to remember the men and women who died fighting America’s battles.  Their goal was to stop tyrants and regimes that treat people like insignificant, disposable, unworthy non-humans.  This was their contribution to upholding the dignity of man and working toward peace.  A fitting memorial to them is to carry on their mission.  Not fighting in a far-away land but living our daily lives as though those around us, those of different skin colors, religions, socio-economic status–everyone–were human beings.  Such a peaceful, tolerant attitude must start with us individually, in our homes, schools, and workplaces and spread to our cities, states, nation, and, ultimately, the world.  Maybe such a global attitude will prevent tyrants and hate-groups from getting a foothold.  Yes, this is idealistic, but so were all those who died in uniform.  Carrying on their idealism is an appropriate way to honor them.  Even if we succeed in making a more peaceful, tolerant world just in our own lives, that is a tribute to the principle they fought for. May 23, 2015 admin Comments Off on Bottled Cockatoos

Does this picture disturb you? 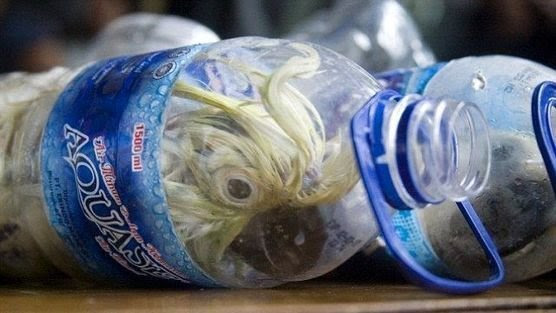 Yes, that’s a bird stuffed into a bottle.  Worse yet, it’s an endangered (only 7000 left in the world) cockatoo. In Indonesia, these birds are sedated and stuffed into plastic bottles so they can easily be shipped to waiting customers.

Indonesia does have laws against this practice, laws which aren’t enforced.  And, true, we live far away and feel we have no influence over the Indonesian government. However, their politicians are like ours; with enough pressure they’ll do something if not because it’s right at least in order to save face in the world and their jobs at home.

Help put on that pressure.  Read the report from CNN, then sign Change.org’s petition that demands harsher penalties for traffickers in bottled birds.

So, my job makes me worthless?

Recent data made me feel pretty worthless.  I’ve been a teacher, receptionist, writer, poet, editor, and a few other things in my life. I thought that each of these jobs had value, because they filled needs in society.

All my life I’ve felt that any work, any job, has worth and dignity. I don’t like the idea that people who are not CEOs but have great responsibility (President of the U.S., teachers, fire, police, medical professionals, those who keep our buildings clean and sanitary, those who care for our children–anyone with a job that serves others) are valued so much less than the head of a corporation. And I don’t like the death of the American dream, that a person who works hard won’t end up in poverty but will succeed.

Practically speaking, not everyone can make $7,000 per hour.  The question is, should anyone be making that much while others work hard yet struggle to feed their families.

I know some of my readers are thinking that my attitude sounds a bit Communistic.  I look at it as going farther back into history, to the time of the Disciples, who followed their Leader’s teachings by caring for each other and working toward the common good.

Our Nation and Animals

May 21, 2015 admin Comments Off on Our Nation and Animals

Our animals can help us assess our country’s greatness, as today’s Thursday Thought quote points out.

“The greatness of a nation and its moral progress can be judged by the way its animals are treated.” – Mahatma Gandhi

Come back to read Saturday’s blog for an eye-opening example.

Richard Nixon, you’re the man!  If it hadn’t been for you, our language wouldn’t have expanded so much.  Or did it contract?

In any event, in 1974 your shenanigans at the Wastergate Hotel began a trend.  Since then, political scandals in the U.S. (we’ll ignore other countries for now) have been called Irangate (Ronald Regan), Nannygate (Zoe Baird and Kimba Wood), Strippergate (two–in San Diego and in Seattle), Emailgate (Hilary Clinton), Bridgegate (Chris Christie), and many, many others.

Then there are all the swinging “gates” in entertainment, academics, journalism, technology, and sports (we can’t ignore “Deflategate”).

If you want to recall others, Wikipedia has a good list: http://en.wikipedia.org/wiki/List_of_scandals_with_%22-gate%22_suffix.

Look what Nixon started.  Now, if we could just close this gate and corral all the dishonest, conniving politicians onto a far-away island with no way of communicating with the rest of us….

Meanwhile, I wonder what Nixon is doing these days, secure behind the Pearly Gates.