After living through this past week, I’ve decided how to vote.  Maybe not the specific person yet.  But I know for sure that the person I decide to vote for will NOT be one who is acting like a spoiled 6-year-old.

I fear a President who deals with foreign heads of state–especially, say, North Korea or Russia–or represents the U.S. in settling the Israeli/Palestinian conflict–or decides how to handle Isis and other terrorist groups.  I fear a person who says to Congress-members, “It’s my way or the highway” rather than promoting thoughtful discussion of all sides of an issue and working toward a more unified, effective Congress.  I fear a President who engages in personal attacks rather than meaningful dialog, thus treating us citizens as though we don’t have a brain or know what’s good for us.  Yes, I fear a spoiled brat, egotistic, self-important 6-year-old President.

Now, although you don’t know who I’ll vote for in this coming Primary and General elections, I bet you can guess who WILL NOT get my vote.  And I urge you to vote with me.

Who Needs a Farmer’s Market?!

This chart gives a good idea of why farmers’ markets are so valuable not only to our healthier diet but also to our communities as a whole.

Are You Biased Against Women Leaders?

February 26, 2016 admin Comments Off on Are You Biased Against Women Leaders?

Most of us haven’t given this any thought.  But the American Association of University Women (AAUW) has.  They invite you to take a 10-minute quiz to help you discover the answer to that question.

For Those Who Observe Lent–and Everyone Else

February 25, 2016 admin Comments Off on For Those Who Observe Lent–and Everyone Else

Today’s Thursday Thought gives the Pope’s insight on how to observe Lent, and, by extension, how to live life.

Do you want to fast this Lent?

The Republicans’ Choice (Not Trump)

February 24, 2016 admin Comments Off on The Republicans’ Choice (Not Trump)

I don’t know who the Dems favor but it’s obvious who most of the Republicans want.  Actually, I think they should stop the debates and caucuses right now and admit who is foremost on their hearts and minds.

After all, who is mentioned most often (no, not Trump)?  Who has never done anything wrong in his political life?  Who could unify the Party 100%? Who is the only one never to have uttered a single negative comment against any of these candidates?  Who could straighten out our country and our world within a single term?  Who is always spoken of in reverential terms?  Who is…let’s call it what it is…PERFECT?

Ronald Reagan, of course.  Sure, he’s dead.  But now that we’ve had our first Black President and have come close to our first woman President, why not our first dead President? Besides, after listening to the Republicans speak about him often, I think he might just have the power to come back from the dead.

So why not just nominate the guy and be done with it?

Germs on Airplanes & What to Do

February 23, 2016 admin Comments Off on Germs on Airplanes & What to Do

I’ve always thought that the confines space of an airplane can’t be too healthy.  And touching all those surfaces that…well, when were they cleaned last?

I ran across an article that addresses these issues and offers suggestions about protecting ourselves.

Here’s a phrase most of us use: ““Keep the ball rolling,” meaning to keep an activity going, to keep people enthusiastic about it.  It has an interesting history, especially in politics.

That’s what the Presidential candidates are trying to do.  “Keep the ball rolling” is an old American phrase that originated during the 1840 election–a contest between incumbent President Martin Van Buren and Whig candidates Martin Van Buren and war-hero Gen. William Harrison.  That was the election that historians say began all the hoop-la of campaigning, like publicity stunts, songs, and slogans.  In fact, historians say that’s when the first campaign slogan was born: “Tippecanoe and Tyler, too.”

So what does that have to do with our phrase “keep the ball rolling”?  Here are some of the song’s lyrics: “Don’t you hear from every quarter, quarter, quarter,/Good news and true,/That swift the ball is rolling on/For Tippecanoe and Tyler Too.”

PLUS, the Harrison camp referred to “Victory Balls,” referring not to formal dances but to the 10′ diameter balls made of tin and leather that they rolled from one campaign rally to the next one, where supporters were urged to push the balls to the next rally…to “keep the ball rolling.”

I have to admit, right now, with all the political rhetoric and negativity, I’d very much like to let the air out of all the candidates’ rolling balls!

Finally–I can enjoy my fish dinner knowing that it wasn’t provided by slaves.  This week Pres. Obama will sign legislation that stops that fish from making it to U.S. dinner plates.

The Port State Measure Agreement gives officials the power to deny docking or receiving of services by boats that are suspected of illegal fishing.  We are the twentieth country to enact these regulations.

Illegal vessels from Southeast Asia use forced labor for fishing, people locked up in cages and factories to do the work.

But that’s not all.  The legislation will close a loophole in an 85-year-old tariff law that solves the slave-fishing issue AND stops  U.S. importing gold mined by children in Africa and garments sewn by abused women in Bangladesh.  It will regulate some 350+ items being produced by child and forced labor that are currently on our retail shelves. 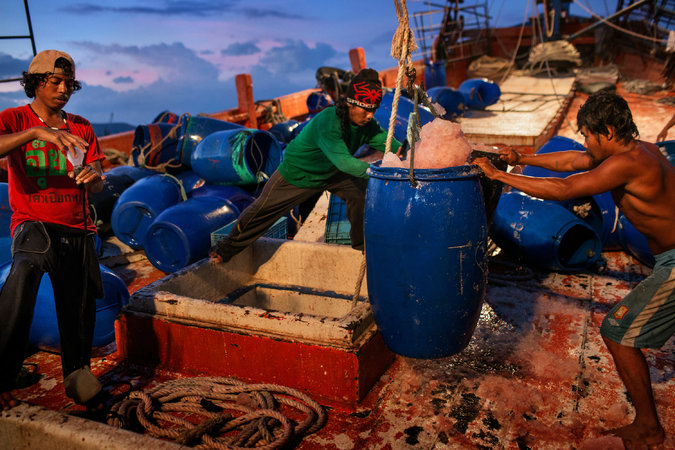 February 15, 2016 admin Comments Off on Envisioning a Random World

Whether it’s the day (Feb. 17) or the entire week (this week), observing National Random Acts of Kindness Week/Day is a pretty good idea.  (In case you’re interested the Day was founded by Josh de Jong of New Zealand.)

Use your imagination.  Watch for opportunities.  You can pay for the coffee of the person in line behind you, give an unexpected compliment, or take a friend’s car (with permission, of course) and get it washed–especially if that friend has difficulty doing it him/herself.  Give a warm smile to someone who seems lonely or down-in-the-dumps.  You can mow your neighbor’s lawn when you mow yours, take in a neighbor’s trash cans with yours after collections, drop off a batch of cookies to a nursing home, thank the crossing guard for keeping your kids safe…all sorts of things.  The act doesn’t have to be big or cost anything; it just needs to be sincere and random.

Gee.  Maybe this could catch on and we’d all continue such acts each day of our lives.  Imagine what the world would be like.

A Film Experience Not to Miss

February 13, 2016 admin Comments Off on A Film Experience Not to Miss

Beautiful new IMAX movie now playing to celebrate the 100th birthday of our National Park Service.  For a taste, watch this short trailer, narrated by Robert Redford.  Then watch for the movie in a theater near you.  I plan to do just that…and continue to enjoy the gift of our parks.