I’m up to my ears in the &%$#!!! things now, and it’s only going to get worse, with election season about to start.  I’m sure you’re as irritated as I am with those phone calls from people who don’t know us and are often, in fact, not people but recordings.  They come at all hours, interrupt our lives, pitch scams at us, and make us mad.  Nobody likes those automatic, sequentially dialed robo calls!

Finally, an organization is gathering force to do something about it.  Watch this short video about the efforts of Consumers Union (the advocacy part of Consumer reports) at http://www.nbcdfw.com/news/local/Consumers-Union-Pushes-for-End-to-Robocalls-297727451.html.

Then get on board to stop robo-calls–sign the Consumers Union petition at https://consumersunion.org/end-robocalls.

Go to my other website, http://www.JackieODonnell.net, and on the Home page view a video that I think you’ll find surprising and fascinating.  There’s a bit of personal information there I’m rather proud of, too.

This newly updated website has other pages you might be interested in, as well.  Read an original poem on the Poetry page or take an informative, helpful quiz (click on  Quiz-icals).  If you or someone you know has a disability,  on the Adept-Able Living page you’ll find suggestions for a useful product and equipment maintenance/safety, plus some disability law you should know and a thoughtful quote.

While you’re wandering around my website, please visit the  My Books page and read what my paper and e-books are all about and where you can get them.

And, as always, I welcome your comments to any of my posting or the content of my website.

Earth Hour–Nothing to Make Light Of

March 28, 2015 admin Comments Off on Earth Hour–Nothing to Make Light Of

It’s happening now, wherever 8:30 PM local time arrives for you.  People are turning off their lights for an hour in solidarity for working toward a sustainable future.  This year’s participants are expected to include more than 7,000 cities and 162 countries on all continents.

Turning off the lights is only a symbol, of course, but this annual event (8 years old) really is having an effect.  One year, 35,000 American Girl Scouts were inspired to go into their community and install 132,141 energy-efficient light bulbs.  The former president of Botswana organized to plant 100,000 trees in devastated areas.

Participate by turning off all lights tonight 8:30 – 9:30.  Yes, all lights, including the TV and phone.  Join with others to acknowledge the fact that all of us together need to work on saving our not-inexhaustible resources and keeping our Earth healthy for future generations.

To watch the lights go our for that hour acrose the globe, click on http://time.com/3762297/earth-hour-switch-off-lights/.

What Percentage Are You In?

March 26, 2015 admin Comments Off on What Percentage Are You In?

In today’s Thursday Thought quote, Susan Sontag gives us an excellent reason not to just sit back and do nothing when encountering potentially hurtful situations.

I’m afraid for my granddaughter.  She’s 11 and loves having her picture taken. (Fine with me; I get more pictures.)  Like many of her friends, she copies the movie star stance: standing a little sideways, one leg slightly crossing the other, hand on hip, elbows back to call attention to breasts, posed smile.  It isn’t natural, for her or for the stars.

The women know they’re selling sex appeal.  But what does it say to our young girls?  That they should use their brains and talents to succeed in the world?  That their personalities will help them get along with others throughout their lives?  That they should work hard to achieve what they want?  Of course not.  It says, “Develop a Playboy figure and show it off, because that’s what will get you ahead in life.”

Call me an old-fashioned fuddy-duddy.  I just don’t want my granddaughter to grow up with that attitude.  I love her too much to see her go through unnecessary heartache, feelings of failure, and wasted mind and talent.

March 24, 2015 admin Comments Off on Police and Mental Illness

The Supreme Court should not have to deal with the Frances Sheehan case.  Recall that she’s the woman with schizophrenia shot by police in her room at her group home because she was threatening her social worker with a knife.   The suit before the court is based on the Americans with Disabilities act, saying that police must give “special accommodations” to people with disabilities.

I wasn’t there, so I won’t pass judgment on how the police handled the situation, or on the merits of the case.

What I will pass judgment on, though, is police training.  Apart from the medical profession, what group of people is most likely to have to deal with people with mental disabilities?  Obviously, the police.  In most police departments, officers are instructed to call in for a specially trained officer to diffuse such situations, which, of course, adds time to, therefore, potential escalation of, a dangerous situation.

My question is, if a small number of officers can be trained to work with the mentally ill, why isn’t such training required of all officers?  Wouldn’t that be safer for all concerned, decrease the number of deaths and injuries on both sides, and lessen the need for court cases?

Or am I being too logical?

Something to Bark At

March 23, 2015 admin Comments Off on Something to Bark At

This is National Puppy Day.  Not an officially-sanctioned day, just something Colleen Paige dreamed up in 2006 to call attention to dogs and the joy and love they bring to people.  AND to make more people aware of the horrors of puppy mills–the more than 8,000 backyard breeders and puppy mills in the U.S. that supply pet stores. At these places, dogs are often kept in unsanitary, cruel conditions, then killed when they can no longer produce puppies.  The motto for today is “Adopt Instead of Shop!”

I agree with that.  Here’s a picture of my 10-year-old “ooops” puppy (adopted from a family).  Her name is Riley Casey O’Donnell.  She, like all my dogs before her, is a constant lesson on how to give unconditional love, even when the recipient doesn’t seem to deserve it. 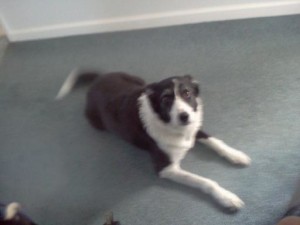 Get help choosing healthy, earth-friendly food by going to www.foodnews.org/walletguide.php for a list of produce in order (most to least) of pesticide levels.  Also, enter your zip code at www.eatwellguide.org to be directed to nearby restaurants, farmers’ markets, and stores which offer sustainable foods.

[For more easy, money-saving, earth-friendly tips, download a FREE copy of Green Riches: Help the Earth & Your Budget. Go to www.Smashwords.com/books/view/7000, choose a format, and download to your computer or e-book device. Or download a free copy from your favorite E-book seller.]

More than You Ever Wanted to Know about Toilet Paper

March 20, 2015 admin Comments Off on More than You Ever Wanted to Know about Toilet Paper

[I’m in a whimsical mood today, so I figured I’d share this fascinating knowledge sent to me by Linda Younts.]

1. The first recorded use of toilet paper was in 6th Century China.

2. By the 14th Century, the Chinese government was mass-producing it.

4. Joseph Gayetty, the man who introduced packaged TP to the U.S., had his name printed on every sheet.

6. It wasn’t until 1935 that a manufacturer was able to promise Splinter-Free Toilet Paper.

7. Seven percent of Americans admit to stealing rolls of toilet paper in hotels.

8. Americans use an average of 8.6 sheets of toilet paper per trip to the bathroom.

10. Historically, what you use to wipe depended on your income level.  Wealthy Romans used wool soaked in rose water and French royalty used lace.

12. 70-75% of the world still doesn’t use toilet paper because it is too expensive or there is not sufficient plumbing.

13. In many Western European countries, bidets are seen as more effective and preferable to toilet paper.

15. The reason toilet paper disintegrates so quickly when wet is that the fibers used to make it are very short.

16. On the International Space Station, they still use regular toilet paper but it must be sealed in special containers and compressed.

17. During Desert Storm, the U.S. Army used toilet paper to camouflage their tanks.

18. In 1973 Johnny Carson caused a toilet paper shortage. He joked that there was a shortage, which there wasn’t, until everyone believed him and ran out to buy up the supply. It took three weeks for some stores to get more stock.

19. There is a contest sponsored by Charmin to design and make wedding dresses out of toilet paper. The winner gets $2,000.

20. There was a toilet paper museum in Wisconsin, The Madison Museum of Bathroom Tissue, but it closed in 2000.  The museum once had over 3,000 rolls of TP from places all over the world, including The Guggenheim, Ellis Island, and Graceland.

22. In 1996, President Clinton passed a Toilet Paper Tax of 6 cents per roll, which is still in effect today. Obama has tried to triple that but the House won’t pass it.

24. The most expensive toilet paper in the world is the Portuguese brand Renova.  It’s three-ply, perfumed, costs $3 per roll, and comes in several colors, including black, red, blue and green.

25. The CEO of Renova came up with the idea for black toilet paper while he was at a Cirque du Soleil show.

27. If you hang your toilet paper so you can pull it from the bottom, you’re considered more intelligent than someone who pulls it from the top.

28. Koji Suzuki, a Japanese horror novelist best known for writing The Ring, had an entire novel printed on a single roll of toilet paper.  It takes place in a public bathroom, and the entire story runs approximately three feet long.

29. When asked what necessity they would bring to a desert island, 49% of people said toilet paper before food.

30. Queen Elizabeth II wipes her royal bottom with silk handkerchiefs. Wonder if the royal chambermaid gets to wash those?

Today’s Thursday Thought is something we all do from time to time:

“It’s funny how humans can wrap their mind around things and fit them into their version of reality.”   (Rick Riordan, The Lightning Thief)