Get comfy and water-wise at the same time.  Turn on your humidifier and relax.  Then, as the water accumulates in your dehumidifier, don’t dump it down the drain.  Water your plants with it instead.

August 27, 2014 admin Comments Off on Bullies Provide a Service

Bullies are a good thing.  That’s what someone recently argued to me.  His reasoning was that he had taught his daughter to stand up to bullies, as should all parents, to get kids used to adult life in the workplace.  No matter where you work, he maintained, there will be bullies, and you need to be ready for them.  He thinks that schools shouldn’t be wasting their time punishing bullies or trying to stop them because school-aged bullies provide a service.

I thought this was an interesting take on the problem.  However, I can’t help but think that if young bullies are stopped now, they’ll never be a problem in the workplace once they grow up.  And more children will have a happier childhood.

What do you think?

Dog-Day Afternon and All Day

August 26, 2014 admin Comments Off on Dog-Day Afternon and All Day

On this National Dog Day (AKA International Dog Day and National Dog Appreciation Day) I celebrate my dog, Riley.  Here she’s pictured resting up after going to the polls to drop off our family’s ballots last election (notice the “I Voted” sticker on her forehead). 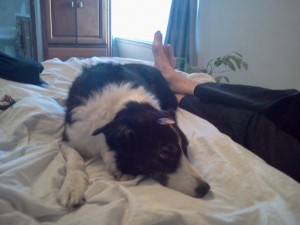 Dogs do a lot for us mere humans, from helping people with disabilities, to guarding our homes (except when resting up from voting), to giving unconditional love, to (for you older TV fans) saving Jimmy from the well…again. It’s right to have a day to honor them.

So, thank you, Riley, and all your canine predecessors in my life.

99 with a Loving Heart

Here’s a woman who plans to use her abilities for as long as she’s able.  She’s 99 years old and plans to make a dress each and every day for a child.  See the video at http://www.wimp.com/dressneed.

[Thanks to Linda Younts for sending me this.]

You Mean We Have to Talk?

Applebee’s wants to force us to talk over our meals. Well, on Tuesdays, at least. They’re thinking about establishing “No Tech Tuesdays,” when they’d ban electronic devices (except, of course, the new tablets they’re installing at their tables).  If we don’t have use of our gizmos, what are we supposed to do while we eat?  If they expect us to have a conversation, I fear that they’ll have to retrain many of us.

I admit, though: as a person who enjoys talking with my meal partner but often has to listen to game noises and business dealings with Asia coming from a nearby table, it sounds like a good idea to me.

Mandela on Making a Difference

August 21, 2014 admin Comments Off on Mandela on Making a Difference

Nelson Mandela hit it right on target when he said, “What counts in life is not the mere fact that we have lived. It is what difference we have made to the lives of others that will determine the significance of the life we lead.”

Is Ebola the New AIDS?

It’s like the AIDS scare all over again.  People are reacting in the same irrational way.  Look at the similarities in our attitudes:

I hope it doesn’t take as long a time for us to understand and deal humanely with Ebola as it did with AIDS.

School boards can be so dumb!  If you’re not from California you may not have seen this on the news.  The Fremont, CA School Board has delayed the adoption of a 9th grade text that they’d previously approved of.  It’s a new health book, called Your Health Today.  What’s wrong?  Is it because it was difficult reading, having been written for college kids, not 9th graders?  No.  Is it because it’s too expensive?  Apparently not.

The problem is the sex education chapter.  It discusses pornography, bondage, prostitution, sex toys, and the like.  Didn’t anyone on the Board read the thing before deciding it was good for those young students?!  Mmmmmm…..

Anyway, I have a solution.  Keep the books and just tell the kids that they’re forbidden from reading that chapter.  And have the parents do the same thing.  After many years as a high school teacher and parent, I’m SURE that will work!

Oh, and tell the kids that other chapters are being considered for the ban, as well.  That way most of the kids will read most of the book and think they’re getting away with something.

Last Saturday I gave you a few ways to get the kids ready for school while being kind to the Earth.  Here are a few more: Shop for school clothes made out of organic cotton or hemp. Look for recycled-plastic totes.  Shop at thrift stores, which have like-new and even new items people bought then discarded.

A Reason to Party Today

August 15, 2014 admin Comments Off on A Reason to Party Today

Another ho-hum Friday?  I think not!  Celebrate the day!  If you can’t think of anything to celebrate, here are five “Days” you can grab hold of, all of which are set for today, Aug. 15.  For a full explanation of any, use the link to go to the appropriate website.

Check the Chip Day (Those implanted in our pets): https://www.avma.org/Events/pethealth/Pages/Check-the-Chip-Day.aspx