20 Children a Day Sent to Hospital

What is the cause of 20 kids a day being sent to the hospital?  Injuries related to guns, according to a new study.  People try to use safety locks and put the guns out  of reach of children, but kids are smarter and more aware than we give them credit for and know exactly where the guns are kept.

No, it’s not the guns themselves that injure our kids because, after all, they’re inanimate objects. But more of them around increases the likelihood of more hurt children because there are more opportunities for them to gain access to these forbidden “toys.”  And more situations in which they’re innocent victims of drive-by shootings, as well as shootings related to vengeance, race, and domestic disputes.

I don’t know what the answer is.  There are pros and cons to stricter gun regulations.  Parents love their kids but are sometimes unthinking people, therefore not always totally careful locking and hiding firearms. Eliminating crime, domestic violence, gangs, and terrorism isn’t something we’ll be able to do soon.  As  I say, I don’t know what the answer is.  But I do  know that more has to  be done bring that twenty a day down to zero.

In Poverty? It’s Your Own Fault

I’m mad, horrified, disgusted, and a lot more.  As you regular readers know, my Thursday Thoughts quotes are normally positive in themselves or from well-known people who give suggestions on how to improve our world.  Today, though, I just need to vent.

The U.S. (I won’t call him “our”) Housing and Urban Development Secretary, Ben Carson, said this in an interview earlier this week:

“I think poverty to a large extent is also a state of mind.  You take somebody that has the right mindset, you can take everything from them and put them on the street, and I guarantee in a little while they’ll be right back up there. And you take somebody with the wrong mindset, you could give them everything in the world, they’ll work their way right back down to the bottom.”  He went on to say that poverty is the result of lack of determination and proper parenting.

Mr. Secretary, tell that to the mother on the streets because she had nothing left after her divorce and, as a stay-at-home mom, no job skills or experience.  Or to the veteran with PTSD and only minimal access to VA services.  Or the mentally or physically disabled person with no insurance and able–maybe–to get only a table-cleaning job at a fast-food place at non-livable  wages.

As I said, I’m mad, horrified, disgusted, and a lot more.

[IKEA just came up a big notch in my corporate-responsibility mind. I’ll let this article speak for itself.]

Since the start of the civil war, almost five million Syrians have fled their homes. Most have ended up in neighboring countries – Turkey, Jordan and Lebanon – where they live among their host communities or in refugee camps.

According to a recent UNHCR study, Jordan hosts the second largest number of refugees relative to the size of its population with 89 refugees for every 1000 inhabitants.

There are well over half a million Syrians (655,000) registered with the United National High Commission for Refugees (UNHCR) in the country. The vast majority (80%) live in the local community and the remainder in refugee camps. Over three quarters (78%) are women and children. Nearly all (93%) live below the poverty line.

IKEA has launched an initiative that it hopes will help – by providing jobs. Partnering with local non-profit organisations, the Swedish furniture giant plans to start a line of textiles and rugs made by Syrian refugees, mostly women, working alongside Jordanians.

“After shelter and basic needs are taken care of, the next thing is really how to integrate people into society,” explained Jesper Brodin, IKEA’s head of range and supply in an interview.

“The products will be a mix of local artisans’ and IKEA’s knowledge of design, as well as regional designers,” he said, adding: “It’s to create something new that our customers can be excited about and that people can be proud of.”

IKEA aims to launch the collection in 2019, with the first group starting work in September 2017. Initially, the products will be sold in the Middle East but in the future could reach the shores of the EU.

We’re in the middle of feel-good Spring.  It’s the time when we have Spring-Cleaning Fever.  In the process, we notice repairs that need to be done and hazards that need to be un-hazarded.  But what about people who are incapable of doing those chores?  You probably know an elderly or infirm person who lives alone and doesn’t have aware family nearby.  Or a single mom with her hands full with work and children.  And you probably can spare a Saturday afternoon for a visit and safety check.

You can check locks on his windows, doors, and gates, tighten their screws, and make sure they work properly.  You can test her fire, smoke, break-in, and medical emergency systems and put in new batteries.  Or replace burned-out light bulbs (house, porch, outside security light) and frayed electrical cords.  Move those flammable items from around the water heater, furnace, gas range—anywhere there’s a flame.  Clean debris from the clothes dryer (from drum to where the air vents outdoors)—a big, often overlooked fire hazard.  I have more safety ideas if you need them.

Take your kids to help.  Not only will the recipient of your labor be safe,  but also your children will learn that we need keep others in mind and look out for each other.

The political world has been too anger- and ulcer-producing recently.  We need to laugh at ourselves a little to reduce the stress.  Here’s a quick look at some laws we’ve passed to solve or prevent some potentially dangerous (?) situations.

How to Hurt a Vulnerable Child

May 19, 2017 admin Comments Off on How to Hurt a Vulnerable Child

An 8th grade girl in Rockdale Co., Georgia, received a trophy.  Her classmates voted her “most likely to ask a question that has already been answered,” and the school included in its class trophies one for her saying “most likely ‘to not pay attention’.”  All the trophies, including this one, were presented to the students at a school assembly.

Two teachers will not return to work there next year because of it. The girl’s mother was incensed.  Any parent or friend of a vulnerable child would be horrified.  Why?  Because the girl has ADHD.

This was not just insensitive but also cruel.  I hope the replacement teachers take the time to understand ADHD and that the school adopts a policy to educate its students and staff on all disabilities.

How Our Children Think of Us

Ever wonder about the future, when our children have only memories of us?  What will they   think?  What will they remember?  Today’s Thursday Thought tells us how to leave them a legacy worth remembering.

“Live so that when your children think of fairness, caring, and integrity, they think of you.” —  H. Jackson Brown, Jr.

At the end of January, I predicted (see my Jan. 30 post)  that President Donald Trump would become the great unifier, bringing Democrats and Republicans together in agreement.  Not on everything, of course, but on some issues important to the welfare of our country.

Minding your Ps and Qs in a Bar

My regular readers know that I like to pass on some American trivia from time to time, especially as it relates to language.  Today is one of those days.

We older people still use this expression, and younger people have heard it: “Mind your Ps and Qs.”  Fact is, it all started in a bar.

In the olden days, a barmaid was supposed to remember what size ale her patrons normally drank, either Pints or Quarts.  In other words, she had to pay close attention to–mind–her Ps and Qs.

Now there’s a bit of American trivia you can work into any conversation…if you’re in a bar.

How Computers and Phones Kill Wildlife

May 13, 2017 admin Comments Off on How Computers and Phones Kill Wildlife

Gorillas and other wildlife are being killed and trafficked as a source of food for miners and militia members in conflict zones including the Democratic Republic of the Congo. The devastation is so great that Grauer’s gorillas were recently listed as critically endangered.

So-called “conflict minerals” – tin, tantalum, and tungsten – are used in common products in the U.S., like smartphones and jewelry. In 2010, Congress included a provision in the Dodd-Frank Wall Street Reform Act requiring the Securities and Exchange Commission to shine a light on American businesses sourcing precious minerals from armed mines contributing to violence, human trafficking, and wildlife slaughter. So far, the evidence shows that U.S. efforts are making a difference and weapons and violence are being eliminated from more mining sites in the DRC. Now, Congress is considering repealing this law. 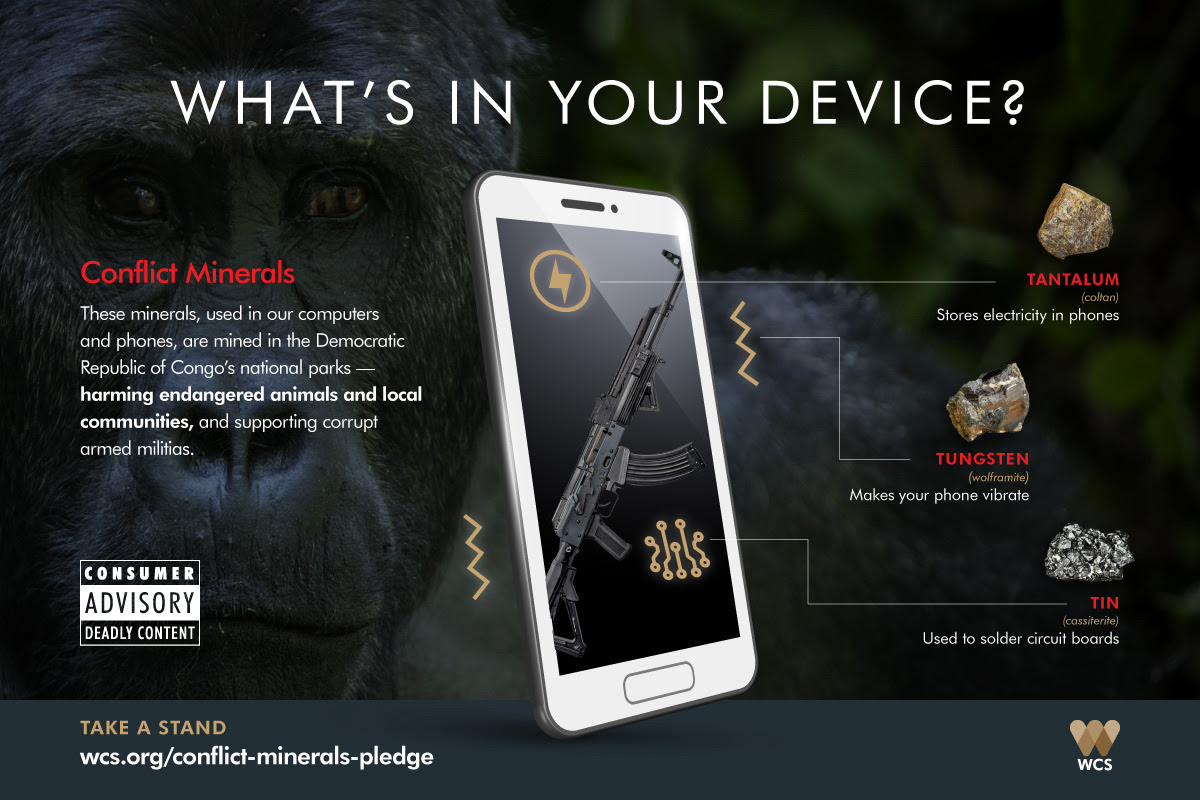 TELL THE CONGRESS: PROTECT WILDLIFE AND KEEP ARMED GROUPS OUT OF DRC MINES!  Go to the Wildlife Conservation Society’s website to learn more and sign a petition to Congress.