July 2, 2018 admin Comments Off on Our Amazing Universe

A new birth! Not a boy or a girl…a planet! And we’re present at its birth. The  first time ever we’ve had  this experience. It doesn’t have a real name, just PDS 70b (around a dwarf star, PDS 70).

It’s amazing, breath-taking, and awe-inspiring. Partly because of our ability to see such an event outside our own solar system.

Below is a picture of it. But you can see and learn more by going to https://www.cnn.com/2018/07/02/world/newborn-planet-image-study/index.html.

This is welcome positive news to start the week. It gives me hope that, despite what we humans are doing to each other on Earth, the Universe continues to be fashioned in beautiful, magnificent ways. 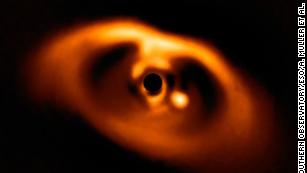 All those end-of-the-world movies have one thing in common: pictures of the Earth devastated by too much ice, smoke, heat, pollution…you name it.  Dumb, right?  Well,   take a look at this short video of what our home planet looks like today.

August 27, 2016 admin Comments Off on Enjoy a Climate-Friendly Yard

Are you thinking about redoing part of your yard, or even all of it?  Now is a good time to do some eco-thinking.  The right yard can be friendly to our planet, easy to keep up, cheap to maintain, and beautiful, all at once.  Before reaching for your gardening tools or taking a trip to the local plant nursery, consider what is in the article “How to Put Your Yard to Work for the environment.”

(I love the fact that one of the pilots and a driving force behind the project is named “Piccard,” as in Jean-Luc Picard of the Starship Enterprise.  Bertrand Piccard and André Borschberg truly have “gone where no man has gone before.”)

Watch the video of the landing below or at https://www.youtube.com/watch?v=k7jnzzx5y1c.

July 21, 2015 admin Comments Off on Another Quirky Question

If you’re a regular reader, you know that my mind sometimes wanders into the Twilight Zone and quirky questions pop into my head.  Today’s comes from the news that brilliant Steven Hawkings is part of a 10-year, $100 million effort to find intelligent life somewhere in the universe.  Here’s my question:

If we find living beings on another planet, how will ICE handle immigration issues with them?

Animal Planet’s claims that they try to protect animals is called into serious question when they air shows like their popular “Call of the Wildman.”  One of its episodes injured three baby raccoons, and they did so within the station’s guidelines.  The station refuses to change the rules that allowed this to happen.  You can view the piece at http://www.animalplanet.com/tv-shows/call-of-the-wildman/videos/raccoons-at-the-raceway.htm.

Granted, raccoons and other animals that wander into human space are pests to us, even though most often we “invite” them by leaving out pet food, water, and garbage.  But there are less injurious ways—like traps—to capture them.  Do they really need to be chased around and  stuffed roughly into bags?  If they’re hurt, when released back into the wild, what chance of survival do they have?

If you’ve seen the show you’ll notice that such rough treatment, without regard to the animals’ safety, is the norm of this group.  In fact, the rougher, the better, it seems, because that’s what gets ratings…which, rather than the animals, seems to be Animal Planet’s chief concern.

February 6, 2014 admin Comments Off on Simple Idea from Dalai Lama

On this Thoughtful Thursday, the Dalai Lama  tells us what our world needs most: