What’s in a Choice?

Today’s Thursday Thought speaks for itself.

All the Gods Agree

Wars are fought over religion. The Supreme Being is called by different names. People distrust, belittle, hate, or kill others because of their religious beliefs. Yet, it all boils down to a simple rule that appears in the holy books of all major religions. Some call it the “Golden Rule.” (Put the cursor on the chart and use Ctrl X while scrolling to enlarge so you can see everything.)

This national illness MUST be cured. 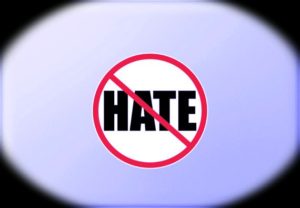 The FBI just came out with a report on hate crimes in the U.S. in 2016.  They cited 6,121 cases during the year, BUT those were the ones that were reported and rose to the legal level of being criminal incidents.  How many more were there, I wonder. Far too many.

So why do people commit hate crimes to begin with? The FBI broke it down into three major categories: 57.5% were motivated by race, 21% by religion, and 17.7% by sexual orientation.

Are we so afraid of people of different races and religions and sexual orientations other than our own?  Are they, simply because of those differences, out to get us? Of course not. So why are we out to get them?

Something to think about.

Can someone please explain to me–WHY?

Isn’t it bad enough that, for a long while, we’ve been seeing hate crimes against people because they are or are perceived as Muslim?  That they’re being killed, attacked, and their places of worship desiccate?

NOW it’s Jewish people.  In the first two months of this year–two months!– there have been 90 hate crimes in 30 states against Jews, their centers, their schools, and their cemeteries.  30 is over half our total number of states.  What does that say about us as Americans?

According to Pew Research, “There are about 4.2 million American adults who say they are Jewish by religion, representing 1.8% of the U.S. adult population. But there are roughly 5.3 million Jews (2.2% of the adult population) if the total also includes ‘Jews of no religion,’” plus  2.4 million adults who claim a “Jewish background” (raised Jewish but have converted to another religion or no longer “feel” Jewish).  Plus another 1.2 million who weren’t raised Jewish but feel they are, in some way, Jewish.

Over 13 million.  That’s a lot of fellow Americans.  That’s a lot of fellow human beings.  Why do we  allow it to happen?  Why do we turn a blind eye toward our countrymen whose only “crime” is being associated with a religion?  When something is as widely accepted and practiced as this is not stopped, it may not be a law but it has the force of law.

I thought maybe we were learning to respect each other more and starting to replace fear of the unfamiliar with understanding.  Then I saw that, according to the FBI, last year the number of hate crimes against Muslims was the highest it’s been since 9/11.

And that was pretty much BEFORE the negativity of the recent campaigns and the unrest that is following,  I dread the 2016 statistics, almost as much as I’m heartsick about all the innocent lives touched by unjust anti-Muslim sentiment.

Origin of Love and Hate

November 6, 2014 admin Comments Off on Origin of Love and Hate

In today’s Thursday Thought, Nelson Mandela has an interesting theory on how we come to love and hate:

“People must learn to hate and if they can learn to hate, they can be taught to love, for love comes more naturally to the human heart than its opposite.” – Nelson Mandela